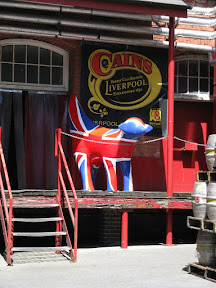 The more I blog, and read beer/pub blogs, the more I want to know about beer. So, last weekend, while on a trip to Liverpool, I went on the Cains brewery tour.  I have had quite a few pints of Cains beer in the past as it is one of the sponsors of the Liverpool Irish Festival of which Mrs. Mouse is the director. I am particularly fond of their Raisin Beer which has a sweet, and savoury taste to it which makes it go down a treat.
Cains has had quite a history. It is the only brewery left in Liverpool, and even then nearly didn't make it. The Dusanj brothers took Cains over in 2002 at a point where production had all but stopped. Since then they have worked tirelessly on bringing the company into profit, and growing year on year.  I don't want to go too much into the history here as the full story can be seen in the history section of the website.

I am not a brewery tour aficionado, the only other tour I have been on being the De Koninck brewery in  Antwerp. I think the Cains tour was better than the one in Antwerp mainly for the accessibility and openness of the tour. We got to see quite a lot of the Terracotta Palace moving our way from the entrance with the Super Lamb Banana, through the canning area, up past the fermenting area, into their craft beer lab, and culminating in the old Hops storeroom just below the big chimney on the top of the building. I think my favourite place on the tour was the beer lab. It was interesting to see some of the different ingredients which go into their craft beers. It was also interesting to hear that Cains is going to be brewing Cobra, formerly brewed somewhere in Poland. Cobra is made using maize and rice instead of hops and barley, which makes it a very delicate beer to brew. Cains have been busy trying to nail down the brewing process in preparation for full scale production. 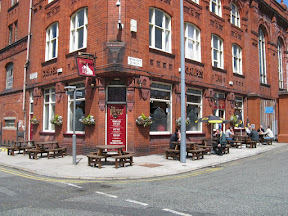 After the tour, we went to The Brewery Tap, the Cains brewery pub for our buffet and two complimentary beers (not bad for £7.99). The pub is a clean, well kept, bar which has all the Cains beers currently on sale (some are seasonal beers only, and so weren't available). So what to choose? The 14 taps contained a whopping 11 beers to choose from, Finest Lager,  Liverpool Lager, Organic Wheat Beer (the seasonal choice for July), Finest Bitter, Raisin Beer, 2008 Culture Beer, FA, IPA, and Mild. Or should I choose one of their bottles (Dragonheart, or Double Bock)?
Since Mrs. Mouse wasn't drinking I had a choice of four. With so much choice I found it hard to get my mind around what I wanted. In the end I opted for a pint of Finest Lager, a pint of 2008, a bottle of FA, and Dragonheart.

First the Finest Lager, which was properly 'lagered' for three months. This was one of the finest pints of beer I have ever had. Crisp, clean, with a grapefruit-style citrus aftertaste. The fullness of fla 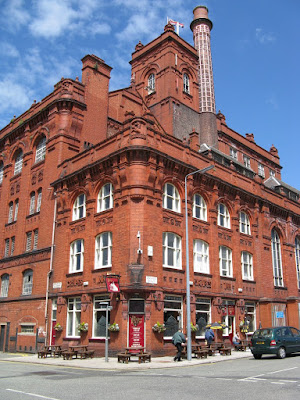 vour was amazing. I firmly believe if I ever see this in a pub down London way, I would start drinking it as a matter of preference. You really realise what you are missing by drinking the commercial lagers.
My second pint was of the 2008 Culture beer. Now I am mainly a lager drinker, but am attempting to broaden my palate. I am very pleased for this attitude of mine as I got to try '08 (as everyone else called it). This bitter was light, not too sweet, and had a dry citrus taste to it which made the pint a pleasure to drink.
Since we had to leg it to the Klimt exhibition at the Tate Liverpool we took the two bottles with us. I have since had these and they were yummy.
The Dragon Heart Brown Ale is "brewed to a 19th century recipe". I quite enjoyed this. It had a sort of smokey toffee taste which made the beer go down smoothly and hides it's 5% ABV.  I think I would quickly get through a few of these and then fall over. I did look down at my pint glass and wonder where my beer had gone.
My final beer was chosen by the landlord and was the Cains FA. Quite honestly, this is the reason I prefer lager to ales/bitters. It was flat. It tasted warm even though it had spent two days in the fridge. Even though I drank it last night, I can't remember what it tasted like (sort of watery and smokey, I think), even though it supposedly the cask conditioning produces a 'fuller flavour'. I will avoid this one in the future. 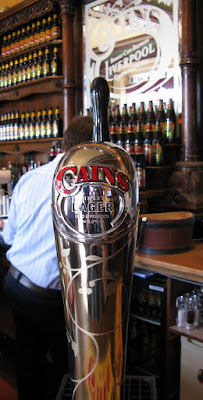 So there you have it. I had an excellent time on the tour, and learnt quite a bit about Cains, and beer in general. I think Cains is an excellent brand which you will probably see more and more over the next few years. Their Seasonal Craft Beer initiative is a stroke of genius which will keep drinkers coming back all year round. The light buffet and two pints included in the tour makes the £7.99 more than worth the price.

Cains brewery tours take place Monday through to Friday and begin at 6.30pm - Saturday & Sundays at 1.00PM . Tours must be pre-booked. Tours Cost £7.99 per person (not suitable for the less agile due to being a Victorian Brewery and the number of stairs). Please Telephone Cains Sales office Mon - Fri 0151 709 8734 - or email:tours@cains.co.uk. All tours must be pre-booked.

I'm a big fan of Cains, from what I've seen of them. I wish you saw them a bit more down here, particularly the lager.

I see no reason why there can't be decent British lagers produced (given that most of the nasty Eurofizz drunk here is brewed in the UK). It's nice to see a big regional having a go at it.

I havent been on a brewery tour in a long time, the nearest one to me closed down many years ago. The Cains selection looks so good and i do like a drink.
Would love to know if the raisin tastes good. Will see if I can get my husband to take me up there to find out.

The Raisin beer is superb, being bottled though it's got a little tendency to repeat on you. Or is that just my dodgy ale raddled guts? A big fan of the Cains; I spend quite a lot of time in Liverpool and can recommend their pubs Doctor Duncans and The Dispensary. If you're in Scouse, I'd also suggest the Baltic Fleet, towards the docks; the home of Wapping Brewery and as far as I know, the only brewpub in town.