High up on the top of the hill that is Chartridge, near the golf club, is The Bell. It is a small gastro- pub which looks like it has benefited from a lot of love from the landlord. We arrived there after an hour and a half of walking through the countryside, but it can be reached easily from Chesham by walking/driving up the Chartridge Lane.  As  you can imagine, I was rather thirsty after 90 minutes of walking, and really wanted my pint of cider. Unfortunately, the tap cider is Scrumpy Jack, which I find too sweet. Instead I went with one of those bottled ciders which they serve with ice (yes I know they are sweet too!) for the refreshment factor. 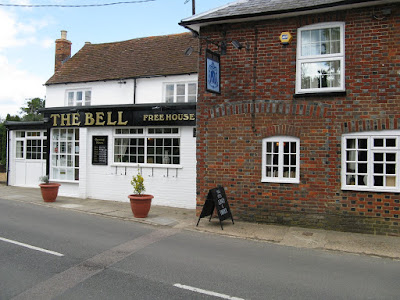 With such a relatively small bar area (the white part seen in the picture on the right), it is no surprise that there aren't many taps. There were, however, three hand pumps dispensing Brakspear, London Pride (I think), and Bombadier. There were the usual euro-pop lagers Carlsberg and Stella, Scrumpy Jack, and Guinness.

The food was very well cooked. The menus were single sheets of printed paper which suggested that the menu gets changed often, something I like in a gastro-pub. I opted for the Chef's Fish and Chips, while Mrs. Mouse opted for Pork Sunday Roast.
The Fish and Chips were perfectly done; obviously being battered upon ordering and then fried.  The result of this was a beautifully golden and crunchy batter. The tartar sauce which came with the fish was also obviously freshly made; I love fresh tartar sauce.
Mrs. Mouse's roast pork was also of the same high quality. The pork was freshly carved and came with freshly steamed/boiled vegetables roast potatoes and Yorkshire puddings. Topping all of this off was a freshly made apple sauce.
Finally, Mrs. Mouse finished off the meal with a coffee and a pudding. I cannot remember which pudding, but it tasted very nice, and the coffee was of a very high quality.

Our overall impression of the pub was that it was lovingly cared for. The food was of high quality, but the portions were perhaps a bit small for the price; there are pubs within a 90 minute walk which serve slightly higher quality food, in larger portions, and at the same price. It was a shame that the cider on tap was Scrumpy Jack, but did not detract from the pleasure of the visit. Both Mrs. Mouse and I agree that we will visit there again, but perhaps only for a drink this time.